Filing a figurative trademark in colour version in the EU: “What you see, what you get” 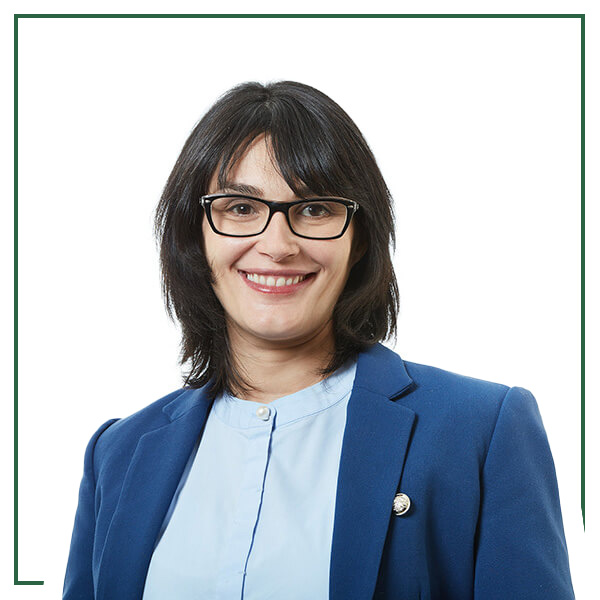 of Brunella Passaretti
Posted November 30, 2020
As from October 1st 2017, the European Intellectual Property Office (EUIPO) does not accept claims for colour versions of figurative trademarks. The filed specimen must contain its colours, where possible, and all its elements according to the principle “what you see, what you get”. In this article we will focus on the variations regarding colours in figurative trademarks and, in particular, in purely figurative trademarks.

The aim of the “what you see, what you get” rule is – among others – to allow third parties to establish with greater certainty the scope of protection of a trademark, also reasonably granting some freedom of initiative outside of it.

Previously, it was accepted practice to file figurative trademarks in black and white or greyscale version, being this kind of filing suitable to grant protection to the right owner also for colour or colour combinations versions.

The amendment of such practice by the EUIPO – which can be defined as a silent revolution – makes subjects willing to protect a figurative trademark face the choice on (a) what to protect exactly: whether a colour or black and white specimen and (b) which and how many colours or colour combinations they want to protect.

The answer to these queries largely depends on the nature of the trademark, if it is a wordmark in stylized writing, a figurative or a complex mark, as well as on the role of the colour in the distinctive character of the sign.

The topic of the commercial use of a trademark in a different form compared to the registered one is very broad and it was subject of a Common communication published by EUIPO on October 20th 2020, which we will surely examine in detail separately.

First of all, we consider figurative trademarks those marks made up of graphic/figurative elements only.

Moreover, it is also possible to classify as figurative trademarks those marks composed of the combination of graphic/figurative elements and text, both with standard characters or stylized writing (complex marks), wordmarks with non-standard fonts, wordmarks in colour versions, letters of non-Latin alphabets and many others.

This silent revolution made us – trademark attorneys assisting our clients – radically change perspective. In fact, in order to balance cost efficiency needs with the most suitable protection strategy for the brand, trademark attorneys need to select among the different figurative versions of a mark proposed/used by the client and decide to protect only those that are most widely used.

This is a great challenge compared to the filing of black and white or greyscale specimen which used to grant protection to all colours and colour variations versions in which the trademark was used.

This topic is also very actual since marketing and promotional needs often lead companies to use their trademarks in commerce in a different form compared to the registered ones and there often are several practical implications deriving from these variations.

Let’s go through them together.

First of all, with regards to the protection, a previous black and white trademark will not be considered identical to the same subsequent trademark in colour version (and vice versa), unless the colour differences are insignificant, i.e. not immediately perceivable by the consumer and noticeable only after a direct comparison between the two signs.

Let’s see some examples of differences considered insignificant and others seen as significant among figurative trademarks, taken from the Common communication about the protection practice of black and white trademarks by EUIPO – EuropeanTMDN:

Examples of differences considered as insignificant between trademarks filed in black and white version and used with chromatic elements: 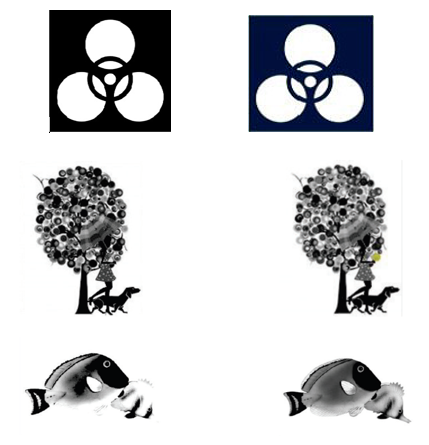 I invite you to actually find the differences between the examples compared above!

Examples of differences considered as significant between trademarks filed in black and white version and used with chromatic elements: 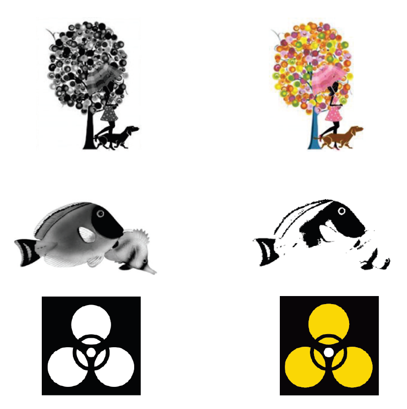 The examples shown above are illustrative of the current orientation of the EUIPO regarding the evaluation of whether there are significant differences between the protected black and white or greyscale marks and their version with chromatic elements used in commerce. The judgement is complex and takes into account several elements, such as the colour distinctiveness in the overall distinctive character of the mark and any other possible similar or non-similar elements of the signs.

The presence of significant differences between the filed black and white or greyscale trademark and the one used in colour version might have an impact on the protection of the registered trademark in several respects.

According to the national and European law (Art. 20 of the Intellectual Property Code and Art. 9 of the EU Regulation 2017/1001) regulating “the rights conferred with the registration”:

The trademark owner’s rights consist in the possibility to make exclusive use of the sign. The owner has the right to forbid third parties to use during economic activities without their consent:

Such strict protection applies to those cases in which trademarks and products are almost completely identical and the differences between signs are limited to irrelevant details, as also clarified by the European Court of Justice case law.

This brings us back on the insignificant and significant differences between a sign protected in black and white or greyscale version and one used in colour version having a first relevant impact on the trademark protection.

Moreover, it is interesting to mention the decision issued by the EU Court on April 9th 2013 in the case about

(contested sign) for allegedly identical products in classes 29 and 30.

In this decision, the Court established that: “in one way, from a visual perspective, the claimant’s arguments have to be refused as they state that a trademark registration in «black and white version» should cover «all colour combinations included in the graphic representation» and that «as a consequence, [the claimant] can ask protection of whatever combination of vertical stripes, made up of both white and coloured stripes, regardless of the fact they are black, orange or yellow». Therefore, the claimant concludes that «those colours [object of the case] can be considered as included».

From this judgment we can conclude that the colour plays a role in evaluating the likely of confusion between conflicting marks only if taken together with other elements and not by itself.

Other relevant implications of this silent revolution concern the institution of priority and the proof of use. We will now briefly go through some technical aspects. If necessary, we are always available for further clarifications and in-depth analysis.

The priority claim allows the owner of a trademark registered in a country belonging to the Paris Convention or to the World Trade Organization (WTO) to extend – within six months from the first filing date – the protection of an identical trademark in another adhering country, while keeping the date of first filing.

In order for the priority institution to be applied, it is necessary that the trademark object of the first filing and the subsequent trademark filed in priority are identical and basically cover the same products and services.

Therefore, it is necessary to check whether a trademark filed in black and white or greyscale version and that is object of a priority claim can be considered identical to the same trademark in colour version.

The answer is once again that a black and white trademark which is object of a priority claim is not identical to the same trademark in colour version, unless the colour differences are insignificant.

If the colour differences are considered significant, the priority request will be refused and the benefit to backdate the subsequent registration application to the priority filing date will be lost, as well as the legal effects of the trademark protection.

Let’s look at an example of priority claim which was considered unacceptable:

(EU trademark application): These two are not the same trademark, therefore the priority benefit is lost.

As extensively explained in the interesting article written by colleague Laura Pedemonte the use of a trademark in a modified form constitutes a valid proof of use when such amendments do not alter the distinctive character of the trademark.

What happens when the amendments/alterations regard exclusively the colour?

According to the Common Communication about the protection practice of black and white trademarks – EuropeanTMDN:

To prove the use, a modification regarding exclusively the colour does not alter the trademark distinctive character provided that: 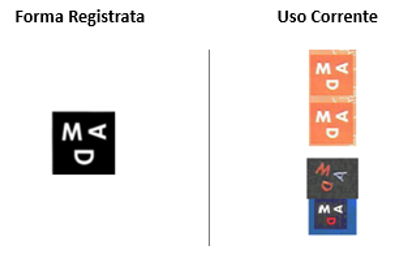 where the Court established that, if no colour is specified, the use of different colour combinations «should be allowed, as long as between the letters and the background there is a colour contrast». The Court also observed that the letter M, A and D were positioned in a particular way in the MUE. As a consequence, reproductions of the sign that do not alter letters’ disposition or the colour contrast constitute an effective use (points 41 and 45).

Therefore, alterations are possible, but with specific restrictions.

Today, in Italy it is still possible to file a trademark in black and white of greyscale versions even though, in instances in which the colour or the colours combination are distinctive elements of a trademark, it is highly advisable – after a careful evaluation conducted on a case-by-case basis – to file the colour version of the trademark also in Italy.

Similar considerations can also be made for filings in greyscale versions.

The silent revolution that took place in the EUIPO practice led us to define with greater attention, when filing a trademark, the characteristics of the specimen to be protected and the importance of colours and colour combinations from a distinctiveness point of view, but also from that of marketing and brand promotion.

It is very important to highlight that this kind of accurate evaluations need to be conducted by professionals in this field.

Just think about the increasing importance acquired nowadays by the so-called non-traditional trademarks, such as colour marks, namely those signs which protect pure colours or colour combinations. But this is a whole different story concerning the fascinating world of trademarks…