Are you ready for the Unitary Patent and the Unified Patent Court?

of Gruppo UPC
Posted June 06, 2022
A relevant change in the European Patent System is almost upon us; between the end of 2022 and the beginning of 2023 the Unitary Patent and the Unified Patent Court should come into force. This article will provide preliminary information to better address this change, and in particular the main differences from the current European Patent system, how the patent law suits will change, which States will be affected by the change, the elements to take into account and the deadlines to be met.

1. The Unitary Patent and the Unified Patent Court

To date, it is not possible to obtain a single patent having effect simultaneously in all the States of the European Union.

According to the current procedures, the European Patent provides for a single examination and granting procedure which does not end with the issue of a unitary title, but which requires to choose the specific States in which to carry out a plurality of national validations, each effective in a respective Contracting State of the European Patent Convention and giving the same rights that would derive from a corresponding national patent. Therefore, each national validation is enforceable against infringers and/or can be nullified by third parties before the respective national court. 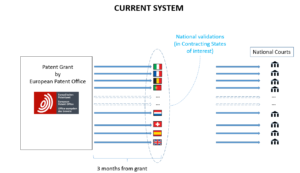 The examination and granting procedure will therefore be carried out by the European Patent Office (EPO), which will issue the patent by the usual procedure. At the end of the procedure, in relation to the territorial scope of the Contracting Member States, the Applicant will have the right to decide whether to:

For a transitional period, the Applicants/Proprietors of a granted European Patent / European Patent Application will be able to request the waiver (defined opt-out) from the Unified Patent Court, thus leaving exclusive jurisdiction and competence, in the traditional way, to the national courts. 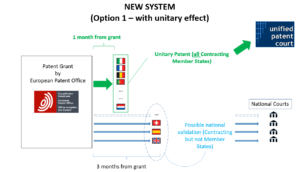 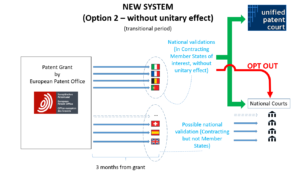 The new system concerning the Unitary Patent (UP) and the Unified Patent Court (UPC) will come into force about four months after Germany deposits the instrument of ratification to the UPC Agreement. The effective date of entry into force has not yet been determined; in any case, the estimated timing is between the end of 2022 and the beginning of 2023.

The map shows the current status for each Member State of the European Union (pre-Brexit). 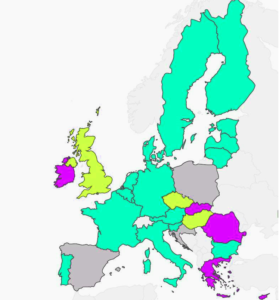 3 States have no intention of joining: Croatia, Poland and Spain.

(*) the Unitary Patent project will start as soon as Germany has completed the ratification formalities of the Agreement).

(**) Brexit occurred during the preparatory works for the UP.

4. Structure of the courts of the Unified Patent Court

The UPC will have exclusive jurisdiction in relation to the Unitary Patent.

With regard to “traditional” European Patents, the jurisdiction of the UPC will be optional for a transitional period of 7 years, which could be extended by 7 more years.

If the proprietor of a “traditional” European Patent will decide not to be judged by the UPC, they can carry out the opt-out procedure, unless the patent is already the subject of a lawsuit before the UPC.

The UPC will consist of a First Instance Court, a Court of Appeal and a Registry.

The Court of First Instance will be composed of a Central Division (based in Paris, Munich, and perhaps in a third country not yet defined) and by Local and Regional Divisions.

The Court of Appeal will be based in Luxembourg.

The competence of the various Divisions will depend on the technical area and on the subject of the dispute.

The opt-out procedure, which can be activated only once, will allow the owner of a patent to actively remove its European Patent from the exclusive jurisdiction of the UPC, so that each national portion of this European Patent remains under the competence of the respective national court. The exclusion from the UPC will be valid for the entire duration of the patent, unless there is a subsequent explicit request to withdraw the opt-out procedure (commonly referred to as opt-in), unless there is a lawsuit already pending before a national court.

The transitional period in which it will be possible to request the opt-out will last at least 7 years, and will probably be extended by another 7 years.

The opt-out procedure may also be activated for European Patent applications pending in this transitional period.

In addition, the opt-out may be requested starting from a time window defined as “sunrise period” which will begin about 3-4 months before the day on which the Unified Patent Court (UPC) becomes operational.

The opt-out request can only be submitted by the owner, and will take effect from the date of registration in the appropriate register.

The opt-out will be valid for all Contracting Member States.

For the period immediately preceding the entry into force of the UP system, the EPO has already provided two transitional measures for European Patent applications in the final stages of the granting procedure.

The first measure allows submitting the UP request in advance of the entry into force of the UP system, in particular immediately after the date of deposit of the instruments of ratification of the agreement by Germany.

The second, on the other hand, allows asking to postpone the granting of the European Patent.

By these two alternatives, the applicant will be able to avoid losing the opportunity to obtain a Unitary Patent for such European Patent applications that are close to being granted.

The Unitary Patent and the Unified Patent Court will certainly be a revolution in the European patent system, of which no one is yet able to assess the real impact.

In the following we will highlight what we believe to be the main strengths and apparent weaknesses of the new system.

Protection in most of the Member States of the European Union with a single title.

Only one translation required (and only for a transitional period).

Renewal fees should be less than the sum of 3-4 national validation renewal fees.

Need for “traditional” national validation for Contracting States that are not members of the European Union or that do not adhere to the Unitary Patent.

Possibility of being sued (e.g. invalidity action) in States that normally wouldn’t be of interest.

If the Unitary Patent is invalidated, it will cease to exist in all Contracting Member States.

Impossibility of reducing management costs over time, as it is not possible to decide to abandon the Unitary Patent only for some of the Contracting Member States, for example in the States of less interest.

Lack of case law relating to UPC, and consequent high uncertainty about the outcome of the law suits.

8. How to prepare for change

Prior to the entry into force of the Unitary Patent / Unified Patent Court, it will be necessary to:

– prioritize the management of the European Patent applications, to decide whether or not to access the UP;

– evaluate the possible opt-out for the granted European patents.

To this end, it is suggested to promptly evaluate with your consultant all the actions to be taken and the optimal strategy.